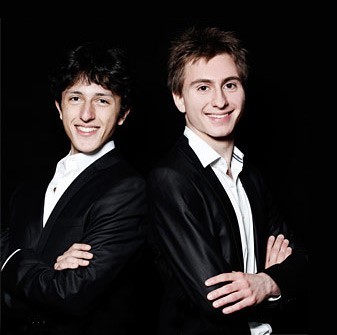 Guillaume Bellom has one of the most atypical path of his generation, pursuing studies in both violin and piano, from the conservatoire of his hometown Besançon all the way to the Conservatoire of Paris. It is in this institution that he decided to fully develop his activity as a pianist, under the influence of striking personalities such as Nicholas Angelich and Hortense Cartier-Bresson.

Finalist and winner of the “Modern Times” prize, rewarding the best performance of the new music piece at the Clara Haskil 2015 competition, he revealed himself during this event dedicated to the great Romanian pianist, herself a good violinist as well. That same year, he won the first prize at the Épinal international competition and became laureate of the “L’Or du Rhin” foundation, before winning the Thierry Scherz prize at the “Sommets Musicaux de Gstaad” the next year. In 2017, he was nominated at the Victoires de la Musique in the “instrumental soloist revelations” category. He is also an associate artist at the Singer-Polignac Foundation in Paris since 2018.

He performed as a soloist with the Orchestre National d'Ile de France, the Chamber Orchestra of Lausanne, the Orchestre National de Montpellier, and the National Orchestra of Lorraine, under the baton of Jacques Mercier, Christian Zacharias, Marzena Diakun. Also deeply interested by chamber music, his mastery of a vast repertoire has made a much sought-after musical partner out of him. He plays regularly in numerous festivals, including the Festival international de piano de la Roque d'Anthéron, the Festival de Pâques in Aix-en-Provence, the Piano aux Jacobins, the Festival de Pâques and L’Août Musical in Deauville, the Festival des Arcs, the Shanghai Concert Hall, the Bombay Royal Opera, the Mariinsky Theatre in St Petersburg, with artists such as Renaud Capuçon, Amaury Coeytaux, Nicolas Dautricourt, Paul Meyer, Yan Levionnois, Victor Julien-Laferrière.

His discography includes notably two albums dedicated to four-hands pieces by Schubert (rewarded by the prestigious “ffff” of French magazine Télérama) and Mozart, recorded with Ismaël Margain for Aparté, a cd with cellist Yan Levionnois (“ffff” of Télérama), released in 2017 for Fondamenta, and a solo cd around Schubert, Haydn, and Debussy, released in 2017 as well by Claves.