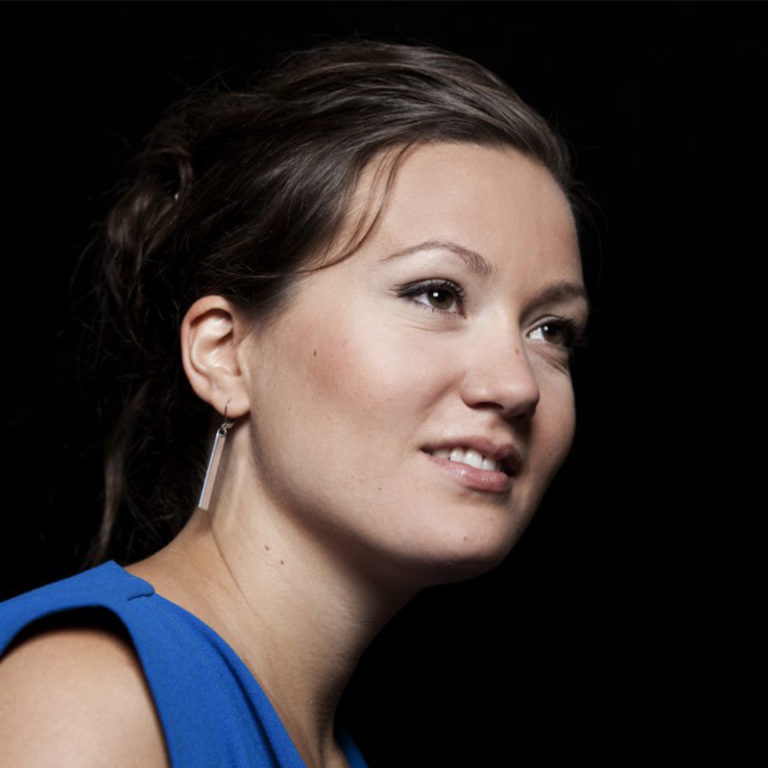 Julie Fuchs starts studying the violin at 7, believing it would lead her to her dream : dance.

She will carry on quietly a full musical training for eleven years, until a first prize.

In the meantime, she discovers the Opera d’Avignon enchantment of shows, a taste for staging during acting classes, and , like a suprise : singing.

She can explore that in a very short lived choir created to accompany Björk, feels the music shared with others, and decides to go on. But it’s really in the Avignon academy of music and later in the CNSM that she understands, as a teacher had suggested, “that she can do something with her voice”.

She gets quickly a 1st Prize in the Paris CNSM unanimously with the jury congratulations, then she is nominated the ADAMI Classical Revelation in 2009.

She was the Palazzetto Bru Zane Prize-winner in the Paris contest in 2010 and the Dussurget Gabriel Prize-winner during the Aix-en-Provence Festival in 2011.

In 2012, she is the sponsor of “Tous à l’Opéra” with Ruggiero Raimondi and she is nominated “Révélation lyrique” in the Victoires de la musique.

She is also nominated “Révélation musicale de l’année” by the Syndicat de la critique for her performance of Ciboulette by Reynaldo Hahn in the Opéra Comique, Zerbinetta by Strauss and for her first CD dedicated to young melodies by Mahler and Debussy (Aparté), with her partner friend the pianist Alphonse Cemin.

Her discography is also made of Renaud by Sacchini (Palazetto Bru Zane) and Hercule Mourant by Dauvergne (Aparté).

In 2014, she received the Victoire de la musique in the “lyrical Artist of the Year.”

For the pleasure of “sharing something different, an intimate and generous meeting with the public”, she likes giving public recitals. As well, “for the diversity of their styles and their very special ways of tackling each piece of works”, she gives concerts conducted by Louis Langrée, Jérémie Rhorer, Adam Fischer, Jean-Claude Malgoire, Hervé Niquet, Laurence Equilbey, Leonardo Garcia-Alarcon or Christophe Rousset.

Passionate as well by other musical worlds, Julie Fuchs collaborates in studio with great names of Jazz such as Giovanni Mirabassi or Paco Seri.

But it’s really in the power of the stage and the pleasure of acting that she “feels alive”. She is Maria in The Sound of Music in the Théâtre du Châtelet, Galatée inAcis et Galatée by Haendel in Aix-en-Provence then Susanna by Mozart in La Fenice in Venice, Musetta inLa Bohème by Puccini, Eliza Doolittle in My Fair Lady, Missia in La veuve joyeuse, Rita by Donizetti, Marzellina in Fidelio (direction: Fabio Luisi), Morgana in Alcinaalongside Cecilia Bartoli (direction: Giovanni Antonini) at the Zurich Opera …

At last, Julie will show her multi-faceted artistic personality in a brand new show :”De quoi j’ai l’air” created in March 2013 in the Opéra d’Avignon.