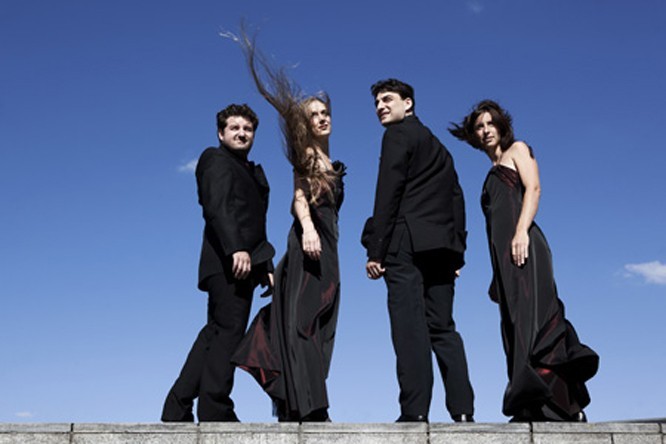 Native of different countries of Europe, the four musicians of the Byron Quartet have met around the Lemanic Basin, thanks to the impetus of Gábor Takács-Nagy. This is why they naturally have wanted to pay tribute to Lord Byron, who was, by his acts and writings, the first great modern European.

The Byron Quartet have started their training at the “Haute Ecole de Musique” in Geneva, in the class of Gábor Takács- Nagy. They obtained there the String Quartet Master Diploma in 2010. In parallel, the Byron Quartet studied in the class of the Ysaÿe Quartet in the “Conservatoire National de Région” of Paris from 2006 to 2008. They also continue their training within the “Proquartet-CEMC” European program. They have had the opportunity to take part to the master classes of members of the Berg, Hagen, Cleveland and Belcea Quartets, as well as the master classes of Eberhard Feltz and György Kurtág.

For several years, the Byron Quartet have been engaged in numerous concerts: Guildhall Ensemble Festival of London, “Promenades Musicales de Fontainebleau”, Festival of Bellerive, “Schubertiades”, “Salle Paderewski” in Lausanne, Tonhalle in Zürich, Concertgebouw in Amsterdam... They can regularly be heard on the French-speaking Swiss radio Espace 2, and the German-speaking Swiss radio DSR 2.

In parallel with their activity as performers, The Byron Quartet is actively involved in the musical pedagogy, by organizing numerous training courses.

In 2009, the Byron Quartet won the Audience Prize of the Chamber Music Contest of the “Pour-cent culturel Migros”, having thus the benefit of their support for two years. The Byron Quartet also benefits from the active support of Proquartet-CEMC, of the Sacem, of the Spedidam, as well as of the Swiss Global Artistic Foundation.